Many of the devices that you will want to connect to XTension require a serial port and modern computers dont include much in the way of serial ports anymore having switched over completely to USB ports. Many interfaces are now available in USB versions, but this does not necessarily make them better or more modern. I would say that in fact the opposite may be true. Don't discount your old serial based devices on account of the availability of newer USB based ones. One area where serial devices are superior is that each port has a specific name, so in many cases you can add multiples of a given piece of hardware. For example XTension will support any number of CM11's on any number of power phases or remote isolated locations, but can connect to only one CM15 because they do not offer a reliable way to tell which one is which if you have multiples on a single USB bus. Just general reliability is also a question. Though adding a usb serial adaptor adds another level of hardware and software to the equation the drivers for any of the popular USB/Serial adaptors are used for a lot more than just connecting our automation devices and so are very much more tested by the time you get around to installing them. There are orders of magnitude more users using the FTDI chip serial adaptors on the macintosh than the CM15 drivers…

Keyspan is the original producer of USB/Serial adaptors for the Mac. They were recently purchased by tripp-lite and their new homepage is at keyspan by Tripp-Lite they still make several serial adaptors that are compatible with the Macintosh and useful for home automation. They still make the dual port version with the original mac ports which are really really rs422 mini-din 8 plugs and if you have legacy gear they may be useful. I would not recommend trying to adapt those for regular rs232 use unless absolutely necessary though as voltages are different and they often cause problems, especially with port powered devices that can only be resolved by building special cables or adaptor boxes. I have used the “high speed” model as well as the 4 port model without any difficulty. The drivers for the units they sell are available from the above link on the specific product pages.

The only potential issue with keyspan units is in their naming conventions. Keyspan drivers build the name of the port from the path that it follows down your USB bus. So if you move the device from one port to another or from one hub to another the name of the port can change. This is not an insurmountable problem, but can be a pain to find what happened to your CM11a port after you added a new hub or something like that.

Update 2/28/2011: I continue to get reports from people of problems with Keyspan adaptors and have recently begun having the same trouble myself. The devices just stop responding, no error, no report, the program doesn’t know the port has gone silent. This may only be a problem with long term connected devices, they may work fine for most things but for our interfaces please consider an FTDI based solution which have drivers that have never given me any trouble at all. 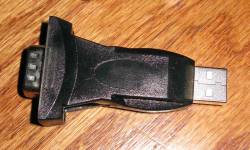 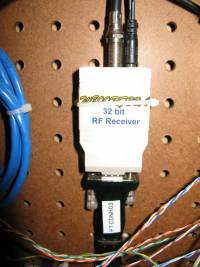 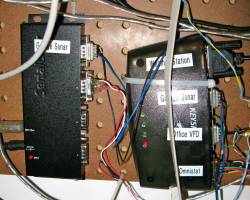 FTDI is a company that makes the underlying chips on which many different companies make adaptors out of. They have excellent OSX support, are inexpensive and are available from many different places. They come in single port and multi-port versions. Virtually any FTDI based product will work excellently with the Mac. The names of the ports are hard coded into the chip so the port name will not change. A couple of examples of FTDI chips that I use are this single port model from Cables To Go and another pic of both the 4 port models I use, one from Keyspan and the other from Serial Gear I really like their metal boxed multi-port versions. They also make an “industrial” version that is hardened and protected but is also very expensive. This is the less expensive middle of the road metal cased model. Another nice ability of the single port models as I showed above is the ability to plug them directly into a DB9 device and not have to purchase, build and route another RS232 cable. The models I purchased came with a USB extension cable that can be used as I show here with my W800

Prolific makes the second most popular USB/Serial chip after FTDI and their chips are in many other companies devices as well. I do not have as much experience with these as I do with FTDI. I do not know for sure how they handle multiple adaptors connected at the same time and I also do not have any direct experience with the reliability of them. They do however have Macintosh driver support. If anybody has used these please feel free to insert your experiences here. UPDATE: having now received several emails from people trying to use prolific based adaptors I can't recommend them. If you already have one it's worth a try but I cannot suggest that you purchase anything other than an FTDI based adaptor. 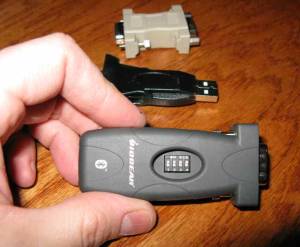 While very promising for the future at this moment I can't recommend them for regular interfaces. The procedure for recovering from a power failure or a disconnect is significantly different as far as pairing that it makes it impossible to reconnect reliably and you end up in a state that requires human intervention to get things going again. I'll keep experimenting with them and it's quite possible that we can officially support these for interfaces in the future. I've used mine successfully for other things like serial LCD displays and such, but not for a device interface yet.

Most serial interfaces can now be connected to XTension via a TCP/Serial interface box. There is one of these built into the Barix boxes and various other manufacturers are making reasonably priced ones. Using one of these in XTension is as simple as selecting remote TCP connection as the serial port in the XTension preferences. It will then add an IP address and port field into which you'd put the information you got from the device setup. Mostly these devices are setup via a little web interface or other configuration program. You need to setup the baud rate and other serial parameters manually with their interface, but once setup they should remember them. It is NOT necessary that a device advertise Mac support in order to use it with XTension. As long as the setup is available via a standard interface either telnet or web or whatever you can use it with XTension. For windows many of these manufacturers build drivers which create what looks like a com port to any program but that really redirects the output to the network stream. This allows you to use them with any program that just looks for regular serial ports. Since XTension implements the streams at a higher level it can connect directly to the network instead of a real serial port without any driver low level magic necessary. For most supported devices the baud and other serial setup information is now included in the device page here, if it’s not been filled in for something you need or you want to know if it’s supported yet please drop me a note.

Additionally the 232 and 485 port that come with the Barix Barionet devices are fully supported for extending a connection through XTension too. Any serial device can be plugged into them as well.

If you’re using a wiznet to control a device that just doesn’t want to respond while it works perfectly on a USB adaptor it may be that the device uses current from the DTR pin to power it’s internal rs232 level shifters. If thats the case it may be possible to supply 5v to it on the DTR pin directly to wake it up. This is necessary when connecting a UPB Pim like this or an Omnistat Thermostat. This is a simple modification to the wiznet card that you can see here Putting a Serial UPB PIM on a Wiznet Ethernet Adaptor