The new Home Seer switches are excellent dimmers and supported in XTension for their central scene capability. The following article also applies to their new HS-WD200+ dimmer as well as the HS-WS100+ non-dimmable relay switch. For more info on using the other capabilities of the HS-WD200+ dimmer click here

In order to use the Central Scene capability of these switches in XTension requires that you are using the new Vera UI7 interface and not the legacy UI5 interface. 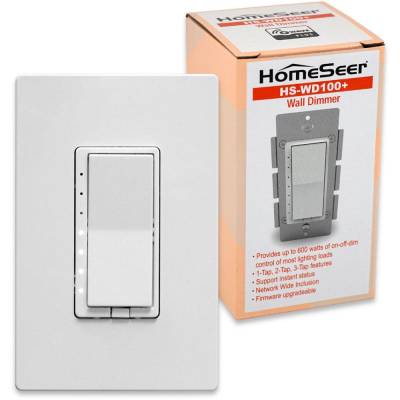 These dimmers support Central Scene changes which means that they will update their value in XTension almost immediately upon a local change. Unlike other older 2-way switch communication systems you should not try to trigger other actions from the On script when the value changes. The value can chance several times as the switch is dimming itself to the new level so your On script would run multiple times. The correct way is to create an On script and add an on central scene handler to it as described in the above article.

This will be called almost immediately when the switch is tapped. Two values are sent to you in the handler, the button number and the gesture number. This lets you tell which paddle on the switch was tapped, up or down, and how it was tapped, single tap, double tap, tap and hold etc…

For the Home Seer switches the button index is always 1 for the up paddle and 2 for the down paddle. The following gestures are currently supported by the Vera:

The HS-WD200+ supports all those as well as a quadruple and pentuple click.

When single tapping the default switch behavior is to control the local load as well as send the central scene information.

When performing a double or triple click the local load is not controlled, just the command is sent. So it is easy to create scripts that do things that do not affect the local load. Or if you wish to also control the local load from a double click command then just command the unit from the script as you would any other.

While you can’t tell the different between a hold and a local dim control in XTension, by doing a tap and hold on the switch it will send the same command to us, but will not control the local load. So it may be possible to use that to control other things if you don’t wish those same other things happening when you locally change the dim value at the switch.

via the Set Data verb it is possible to set various parameters in the switch. Note that the parameters of the WD100 are different than the WD200. This is a grid of the most useful parameters that can be set for the WD100+ note that this might change in future firmware versions or hardware revisions so you should verify against the latest version of the user manual that comes with your specific unit before issuing the command. It is entirely possible to brick a dimmer if you issue the wrong commands to the wrong addresses. It’s nice to note however that the WD100 an WD200 share the same parameter number for orientation, and then the WD200 parameters start at 11 so if you confuse the 2 device types when setting data they happily ignore the out of range parameters and do not do anything damaging. if you confuse them with switches from other manufacturers then things could be unpredictable.

These dimmers let you set the local ramp rate and the remote control ramp rate separately, but as is standard in ZWave you cannot include a ramp rate in individual commands. Each one is made of 2 different parameters. The step resolution which appears to be the number of steps it goes through to get to the preset level, and the speed at which it switches between the steps. For some LED lights it may make sense to set a faster ramp rate since they tend to not come on immediately. Some experimentation with the 2 values may be needed to find the ramp rate that you like best for a specific application.