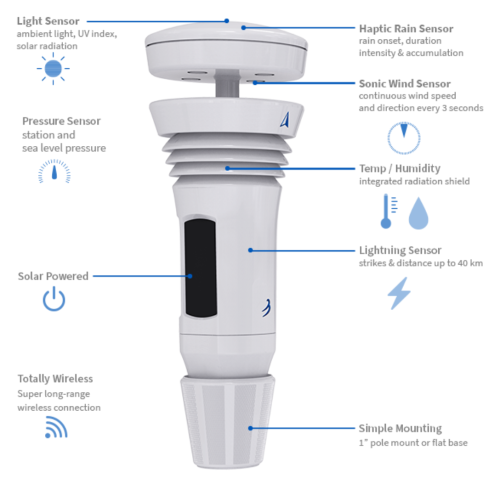 The Tempest weather stations from Weatherflow are very highly rated weather stations with fewer or no moving parts to break down or gum up while out in the weather. They also provide information to your local wifi network in an open and reliable way that makes getting that information into an XTension plugin fairly straight forward.

As of this writing I believe that all data sent by the available devices will be imported and saved to XTension units. I do not currently own one of these (yet) for testing and can only test by pushing scraped data from others into it. There may remain issues or data points that I haven’t seen yet and therefore am not processing properly or at all. If you find that it should be registering something that it is not or that something isn’t working the way that you expect please let me know and we can gather some further data to test with.

I believe that the packet received by XTension is the same one that is received by the Weatherflow hub. If that is correct then no other configuration to the Tempest device or hub themselves should be necessary. If not then it may be necessary to turn on these broadcasts in the configuration. If you know one way or the other please let me know and I will update the documentation. 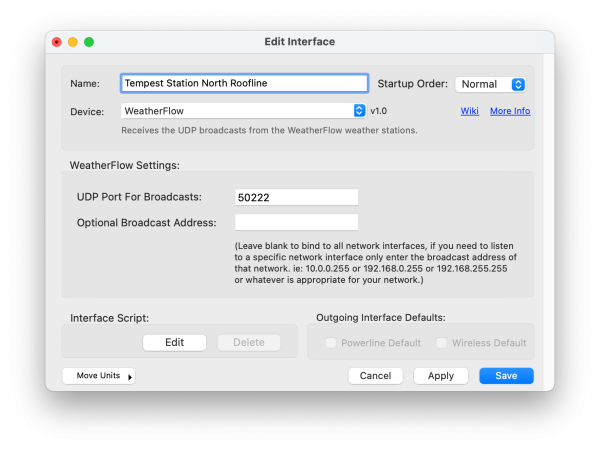 Only a single plugin instance is necessary to support any number of Tempest or other Weatherflow devices.

UDP Port For Broadcasts: Unless you have changed the broadcast address in the Tempest device or hub the default setting is 50222.

Optional Broadcast Address: Almost everyone should leave this field blank. For those with more complex networks trying to isolate some devices from others it may be necessary to specify the UDP Broadcast address that should be listnened to. If you have multiple network interfaces active on the server at once for various purposes this may also be necessary. Some VPN systems may also make it necessary to set this specifically. If you’ve done any of that then hopefully you know the proper settings for the virtual networks. If this field is left blank then the plugin will attempt to bind to any available network interface which is what you would normally want.

XTension will create units from the device as the data is received. You may not see all the supported units show up at once, but only as the data begins to trickle in. This way units that are not supported by your device won’t be sitting in the lists but never updating.

At creation the Unit names will all be prefixed by the serial number of the station. Once the units are created you can edit them to either remove the serial number completely or to give them a more descriptive name. You do not have to leave the units with their default name. You should not change the unit address however, this is how the data gets routed to the unit in XTension.

As of this moment all measurement values are sent in the units that the device reports them in, degrees C as opposed to degrees F and so forth. No converting of units inside the plugin is available yet but that is something I could add in the future, please let me know. It may be possible to change the units being used in the settings of the Tempest or hub. Right now the default suffixes used in XTension are for the default units used by the device. If you change the units in the device the suffixes in XTension will not know to change and you should edit the XTension Units and visit the Display tab where you will find the Suffix field. Please update the suffix with the appropriate values for your configuration. The following table shows the data that is received and the default units, if any, that will be set when creating new Units in XTension.

The standard interface script handlers for the error being set should be run and cleared if any errors are sent. You can trap these as events for alerts or other dispay or action from there.