The Active RFID plugin currently supports the serial port version of the receiver from Ananiah Electronics. These are available directly from them via their ebay store or from a US distributor cliste 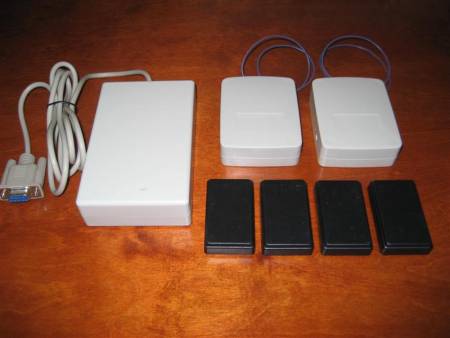 The receiver has it's antenna wire wound up inside that box as do the short range transmitters, but the longer range ones have the wire hanging out.

There are 2 kinds of RFID systems out there. Active and Passive. A passive system is the simplest, it has no batteries but is actually energized by the radio you use to read it's code. They are by necessity very short range, the parallax RFID that is also supported by this plugin is an example of short range, passive RFID. If you want to track something like your car driving up the driveway then you need longer range, active devices such as these. These have batteries and a transmitter inside them and every few seconds they send out their ID code to be received by the receiver. You'll get an ON for the assigned unit in XTension within 3 seconds of the transmitter entering the range of the receiver. For a passive receiver you would need to hold the card or the keyfob up to the reader.

Since the receiver is a serial port device you will need a USB/Serial adaptor of some kind. Once that is working and the connection is physically made open the XTension preferences and create a new interface. Select “RFID” as the device type in order to display the device specific options.

The “Presence Time Out” setting is the amount of time you want to wait after the last message is received from the transmitter before assuming it's gone and turning off it's unit. With the active sending their codes every 2 to 3 seconds you could theoretically set this as low as 5 seconds but you would see a lot of on and off chatter as packets were lost to noise or collisions with other units. This is a busy frequency potentially and a low power transmitter. Packets will be lost. In most cases the default of 60 seconds will be enough to ensure you dont get a false off, but depending on your setup and equipment and environment you may need to set this to longer. (in order for a change to this setting to take effect you must disable and re-enable the interface after saving)

Though the receiver advertises that it can get it's power from the serial port I could not get this to work reliably with any USB serial adaptor that I had here. I recommend you plan to provide power via the standard DC port. You may think that it's working as you may initially receive a packet or 2 but it wont be reliable. You will need to open the case to find the DC plug on the device itself, it is not brought through and mounted to the case.

Once the device is connected, powered and an interface for it is created in XTension you will begin to receive ON's for addresses that it receives. Look in the alien addresses window for RFIDSense or RFIDNoSense commands. The addresses will be 8 character numbers like 33456634. Create a new unit, select the interface you created in the preferences screen as the interface and the device popup will default to RFID as that is the only device type supported by that interface.

Fill in the address number that you got from the Alien Addresses window and the unit will now turn on and off with the receiving or not receiving of the codes from the interface.

Modifying the Antenna for additional Range