XTension currently supports 8 models of the excellent data acquisition modules from Weeder Technology The cards all connect via serial port so would require a USB/Serial adaptor or ethernet/serial adaptor such as a Wiznet card.

Up to 6 weeder cards of any combination may be chained off a single Serial adaptor or ethernet/Serial adaptor. Any number of individual interfaces may be created to connect any number of weeder modules at 6 each. 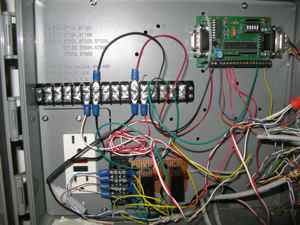 This module has 8 outputs, and 2 inputs. The output units in XTension should be created in the normal way. The address of the units is the address of the card as set by the dip switches and then a number that corresponds to the actual output. Instead of A the first pin is numbered 1. So if your card address is “A” then the outputs would be addressed in XTension as A1, A2…A8. To use the inputs create units with addresses of the card address and the letter “I” and “J” the same letters as they have on the card. So if your card is at address “A” then their addresses would be “AI” and “AJ”

note that the outputs are actually switches to ground. So you must use the V+ outputs and then instead of connecting whatever you’re powering to ground, connect it to the output terminal.

Using with an Ethernet/Serial adaptor

The weeder interface in XTension supports a connection via an ethernet/serial adaptor such as those from Wiznet. The proper settings are baud: 9600, no parity, 8 data bits, 1 stop bit.