The humorously named ceiling fan company “Big Ass Fans” makes a residential model called Haiku that has an iPhone app for controlling them and a wifi interface on board the fan. The protocol, while not documented by them, is also not needlessly obfuscated making it possible to control and monitor these with XTension and other home automation systems.

The Haiku fan plugin is included in the default XTension distribution after version 9.4.12. No other installation is necessary. Since some of the communication is done via local broadcasts it is necessary that the fans and XTension be on the same network subnet. If XTension cannot see your fans but the iOS app can then it’s possible you have more than one router with the downstream ones not properly setup into Bridge mode. 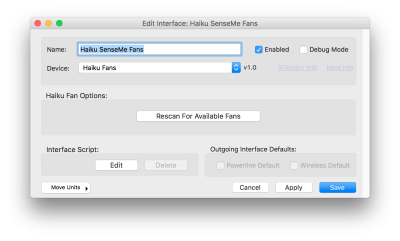 Create a new interface and select “Haiku Fans” from the Device popup. Save the interface and then enable it. Any fans on the network should automatically appear in XTension shortly thereafter. XTension will periodically search for new fans, or for fans that were offline when the interface started but you can jump start getting that fan back online by clicking the “Rescan for available fans” button.

No other configuration in XTension is needed

XTension will automatically create units appropriate for the control of your fan when it is discovered on the network.

The names will take the interface name and append the function. Once created you can change the names to anything else that is meaningful to you.

The first unit created will be for control of the speed of the fan. Current Haiku fans support 7 speeds and so you will be able to dim them through 7 levels or select a new level from the popup in the Control column.

If the fan has a light kit installed then a unit for controlling the light will also be created. Currently the fans support 16 levels of light dimming. The regular off-100% dimming levels of a regular dimmer switch will be scaled when sending to the fan. The light kit is not pictured in the screen shot.

If the fan has motion sensor support then you will also get an Occupied unit. That will turn on and off as the fan senses that people are moving in the room. Note that it does not trigger constantly like some other motion sensors, but just stays on until there has been no motion in the room long enough for it to time out.

If you have multiple fans joined together into a “room” they will likely show up with slightly confusing names as shown in the screen shot. The “Haiku_EE:4A:02” and “Haiku_EC:39:CB” are parts of a “room” This first version of the plugin does not support rooms directly however one of the fans in the room will be the master fan and controlling it will also control all the others. This is easy enough to discover by controlling the fans in the room one by one until you discover which is the master by seeing all the other fans get the same command. You can then rename the unit in XTension to reflect that is the room controller. This will not change the name in the fans themselves or in their iOS app. 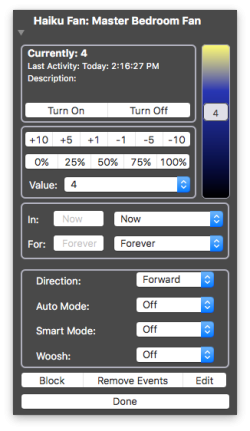 Clicking on the Jewel icon in the list or clicking on the entry line in the Web Remotes will bring up the advanced control dialog for the Fan. Here you can change the fan direction, turn on and off the “Auto” setting that would otherwise adjust the fans speed based on occupancy, turn on or off smart mode and also turn on or off “Woosh” mode.

If you’re fan has a light kit those units will include controls for adjusting Auto mode for the light as well.